Learning Meteorology: Past, Present and Future

On a clear day, the little-known UC Davis weather station is barely noticeable to passersby, but it has been recording weather since the 1800s. Students monitor winds, temperature and other weather conditions each day. (Tiffany Dobbyn/UC Davis)

Meteorologists use a wide array of instruments to measure weather conditions. At University of California, Davis, students studying atmospheric science get an up-close look at those various instruments — some of which were first designed in the late 1800s — to gather data to predict the weather.

Alexis Clouser and Brody Adams, both seniors majoring in atmospheric science, have woken up with the sun many times to record weather conditions at the UC Davis Weather Climate Station, located west of the main campus near Campbell Road. They are among a rotating group of students who are responsible for visiting the station each day by 8 a.m. to collect and record the data.

“It feels like you’re doing something important, and that you are part of something that’s been going on since the 1870s.” — Brody Adams

The station features historical instruments that continuously monitor atmospheric variables, including daily high and low temperatures, wind speed and direction, and precipitation. The station has a westward-facing observation deck that, on some days, allows for a great view toward the city of Winters. 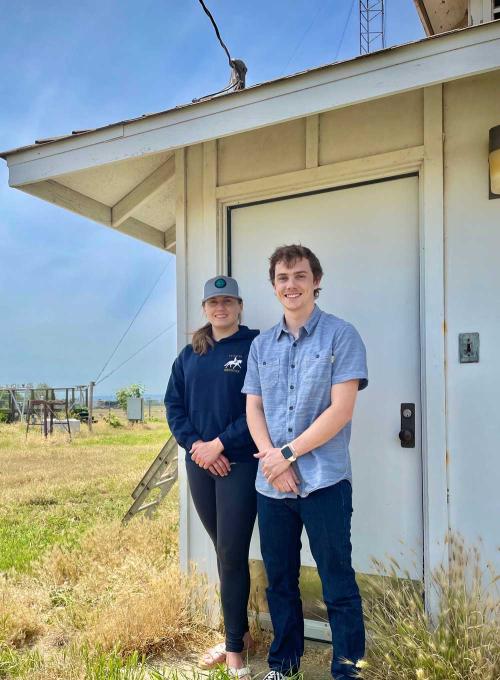 Alexis Clouser and Brody Adams, atmospheric science students at UC Davis, are among the students who rise with the sun to monitor campus weather conditions at the UC Davis weather station. (Tiffany Dobbyn/UC Davis)

“On a really clear day, you can see what seems like practically every oak tree on the mountains,” Clouser said.

Atmospheric science professor Kyaw Tha Paw U said that according to the National Centers for Environmental Information, the UC Davis station, which was previously called the Davisville Experimental Farm Station, has been in operation since 1871. Although there are some gaps in the data between the late 1800s and the early 1900s, there are original Davis weather station records that date back to March 1906 (they can be accessed on a National Oceanic and Atmospheric Administration website). The UC Davis station is part of the U.S. Historical Climatology Network, and when observations are made on campus, the information is saved in a database. The data is also shared with the National Weather Service, and students present the weather on the atmospheric science department’s website each morning.

Clouser and Adams are highly skilled at manually recording the readings from the decades-old instruments at the station. During each visit, they check out the two liquid-in-glass thermometers, stored in a wooden enclosure, to record the high and low temperatures.

“In the winter, I like to see what the low was, that’s cool to see,” Adams said. “In the summer, it’s kind of dreadful seeing how hot it got.”

They also look at anemometers, which measure the direction and speed of wind. There are two rain gauges; one electronically measures any rainfall, while the other is done manually. One of the oldest instruments at the station is called a Campbell Stokes Recorder, which was first invented in 1853. It’s a glass sphere that is used to measure the duration of bright sunshine.

These daily weather observations not only help create near-future forecasts, but they are also important for generating future climate outlooks that are critical for farmers and water managers.

After they graduate from UC Davis, both Clouser and Adams hope to land a job at one of the six National Weather Service offices in California. They both believe that their knowledge of predicting the weather using weather instruments, like those at the campus station, will help them in the future.

“It helps solidify your basic understanding of the operational meteorological instruments  collecting your data,” Clouser said. “If you’re sitting in a NWS forecast office, these are the instruments that are sending you all that data, so it’s nice to see what exactly you’re working with.”

It also gives them a chance to be a part of campus weather and climate history.

“It feels like you’re doing something important, and that you are part of something that’s been going on since the 1870s,” Adams said. “It’s really cool.”

Make a gift to LAWR